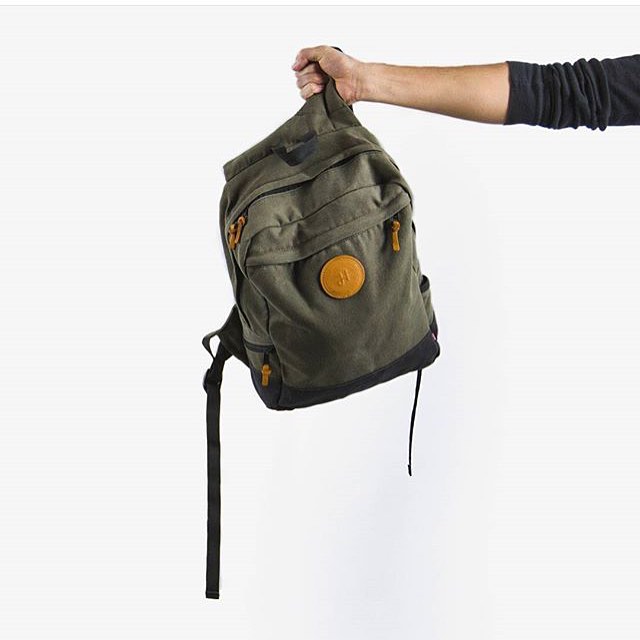 Matt McGinnis and Jake Caggige were friends living in one of the nation's most picturesque, outdoorsy states, when they had a realization: American heritage clothing—a look inspired by the very environment in which the two designers thrive—was not, in fact, American in the truest sense. As in, the seemingly all-American flannel shirts, beanies, and backpacks favored by their peers were often made in factories overseas. Avid skiers and snowboarders, they felt that the land they loved should be authentically represented in the kit of its inhabitants, so they took matters and materials into their own hands. The result was the Hemetic Trading Co.. Established in Burlington in 2013, the brand champions quality, durability, comfort, and accessibility while staying style-conscious. Matt took time away from the sewing machine to tell us about their process, where it's taken them, and where they dream of going. 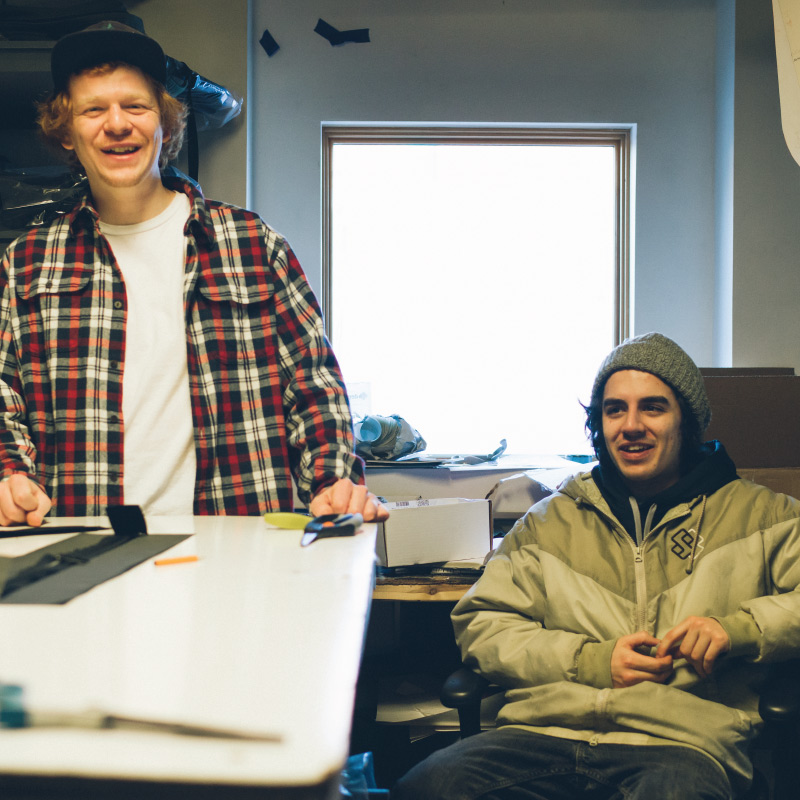 Tell me about Hemetic Trading. What inspired you to do what you start your business?

Hemetic Trading Co. is a goods and lifestyle fashion brand focused on making high-quality, American products, sold at a reasonable price. The inspiration for the brand struck when myself and Jake Caggige began noticing how many people were buying products that had an American heritage feel, but that were manufactured overseas. Coming from a background of cut-and-sew apparel, we realized we could buck this trend. We believe consumers would rather have a product that not only looks American, but is also made in America. Hemetic Trading Co. is our solution, and our goal is to offer a product that has an American story from initial design through production.

What do you love most about what you do?

The process of translating an idea from a sketch into a usable prototype is by far my favorite part. When we develop new products, each one starts as a sketch or an idea, and is thoroughly prototyped in our studio before we let our factory sample it. The excitement of seeing a new product’s final prototype, and then watching our friends’ reactions, will never get old. There’s something about seeing a finished prototype, and knowing that that’s the one. That’s the version that’ll go into production and be sold in stores. Seeing a complete product that was once just an idea in mine or Jake's imagination is extremely gratifying. 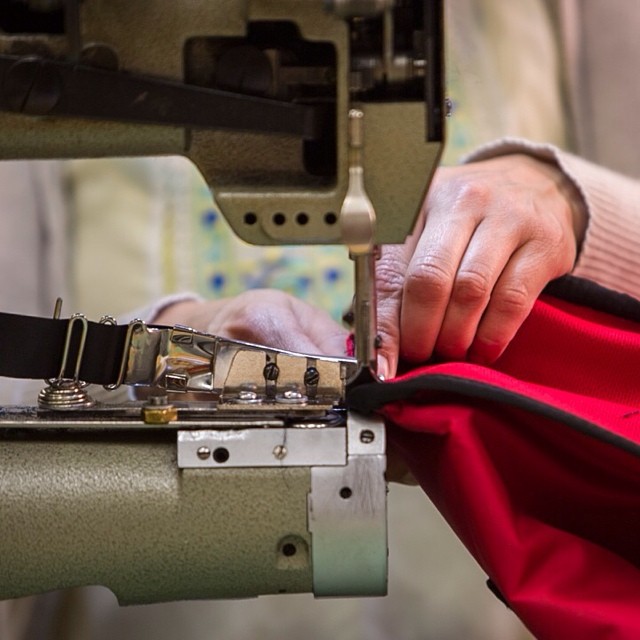 What do you find most challenging?

The battle for time and money, easily. Starting a business in the years after college is extremely difficult. Out of necessity, both Jake and I have separate part-time freelance design jobs. This means two things: our time is split, and, since the other work is only part-time, we don't make a lot of money. So while we consistently put in 60-hour (or more) weeks, we’re making significantly less than our peers who work in full-time, 40-hour week, salaried positions. The way I see it, though, keeping an eye on the end of the tunnel provides the motivation we need.

Why did you settle in Vermont? What do you think makes living and working here special?

For us, the honest reason is simply the snow and general outdoor scene here. Jake and I are snowboarders and skiers respectively, so what initially drew us to Burlington was the amount of riding accessible from the city. Beyond that, Burlington has an awesome culture that’s very supportive of artists, musicians, makers, and small businesses in general. It's that kind of place, and I’m not sure there are many other cities like this left. 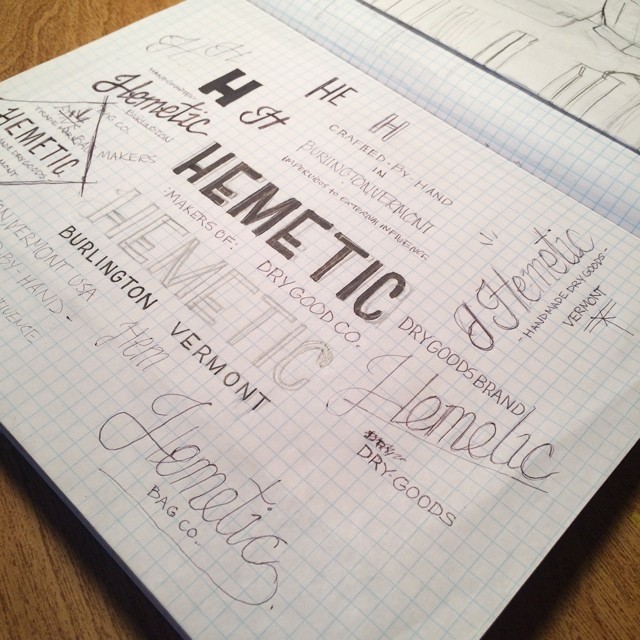 What’s a dream project or collaboration that you‘d love to do?

I’ve gotta say either New Balance or L.L. Bean. New Balance because they’ve shown in recent years that they’re committed to American manufacturing. Also, shoes are so far out of my comfort zone that it would be amazing to work with NB on an American made, Hemetic Trading Co. shoe. L.L. Bean because they’re by far my biggest inspiration. The way they approach their customer service, product differentiation, and especially the way they’ve managed growth over the last hundred years is absolutely incredible. If Hemetic achieves even a fraction of the success they’ve had over the last century, I’ll be extremely satisfied.

Who are some designers, makers, independent businesses that you find inspiring in Vermont and why?

The two biggest names that come to mind are Ursa Major, and Skida. Both of these brands have found a way to push the doors open on crowded industries by staying committed to both quality and American manufacturing. I have a lot of respect and admiration for these brands because they’ve already achieved what I’m aiming for. Plus, the people behind the brands are wonderful. Marshall from Ursa Major is a good friend of ours, and it’s awesome to see him doing well at shows like American Field. Corinne Prevot and Caitlin Mitchell from Skida are also super inspiring: two female entrepreneurs fresh out of college who are already making a living solely by running their own business. 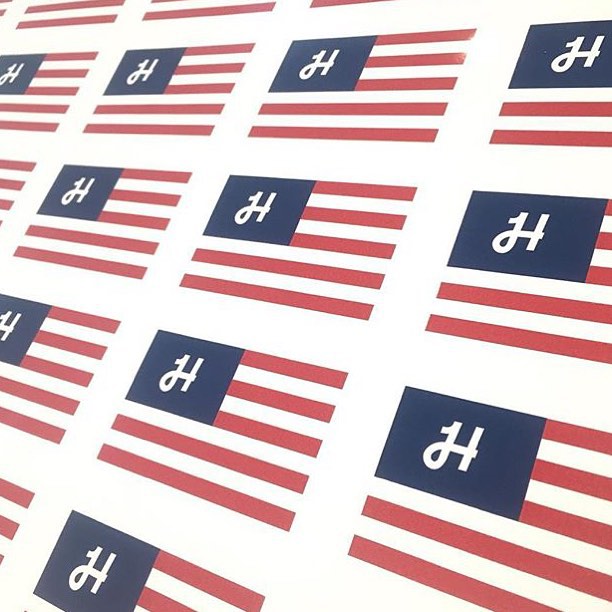 Where do you go when you need some creative inspiration for a new project?

That all depends on what it is I’m working on. I will say, though, that New York City is the most inspiring place I’ve ever been. Being a bit of a graffiti and hip-hop nerd, I find a lot of inspiration from simply riding the trains down there. Just thinking about hip-hop history and the hard work of that culture — how they started with nothing but a turntable and some electricity stolen from a street light, and how far it has all come… I find that story of creativity, persistence, and drive to be incredibly inspiring. The melting pot atmosphere down there also liberates me. On any given block, you run into people of all ethnicities, religions, and income levels. That always reminds me of how unique every person is. It makes me realize that I’m one in a million and that, at least for now, my successes will be more celebrated than my failures. For whatever reason, that eliminates a lot of my fears. I always have a solid burst of creativity after a trip to New York. Whenever I leave the city and come back to Vermont, life becomes way slower, the buildings a lot shorter, but the inspiration lingers.

Check out Matt's recommendations for where to eat, drink, shop and more in Vermont here or head over to the full state guide for more makers and travel tips. 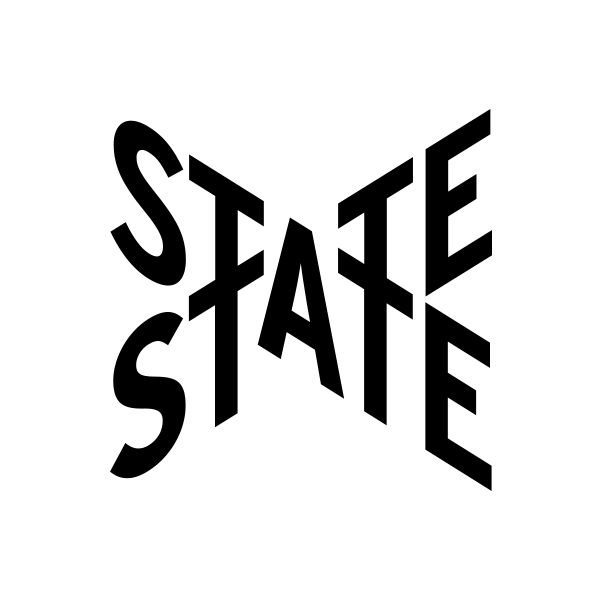 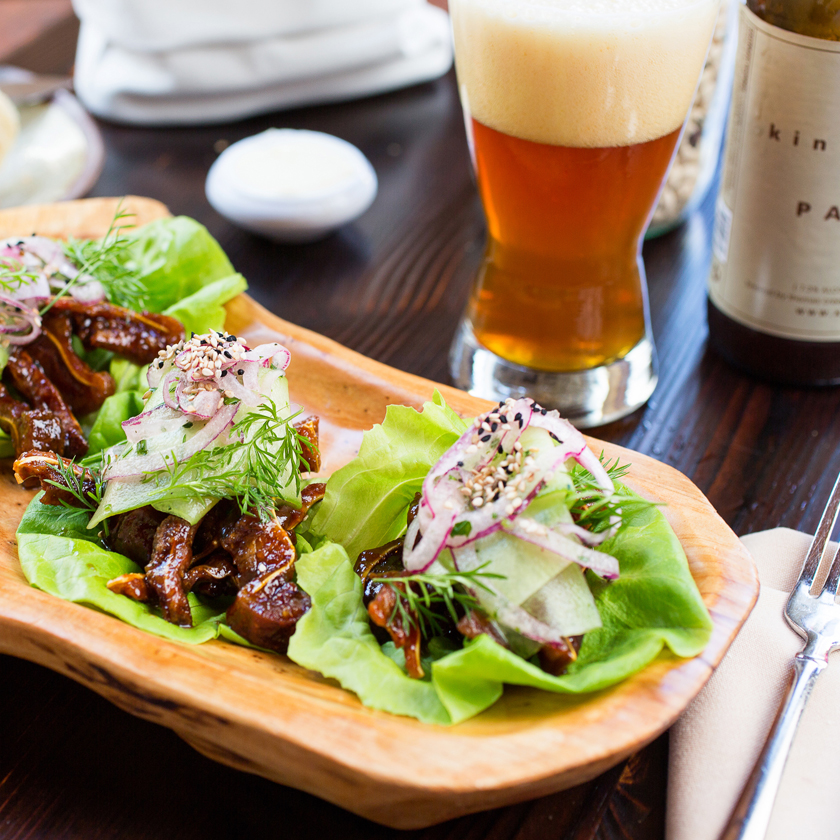 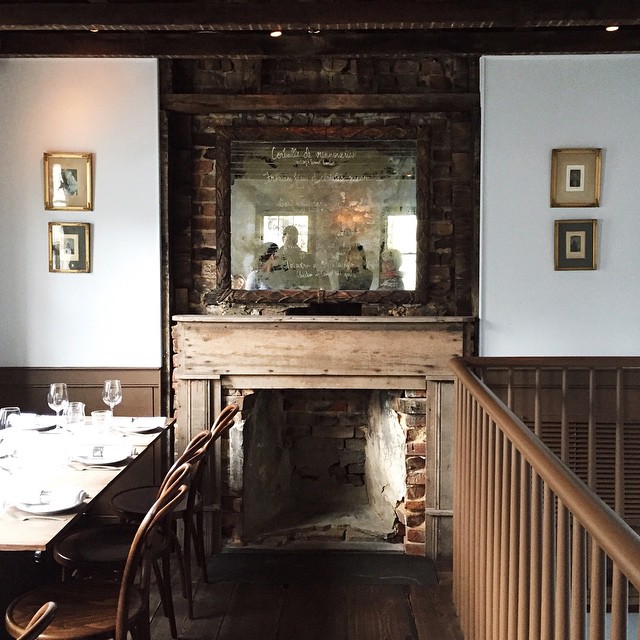 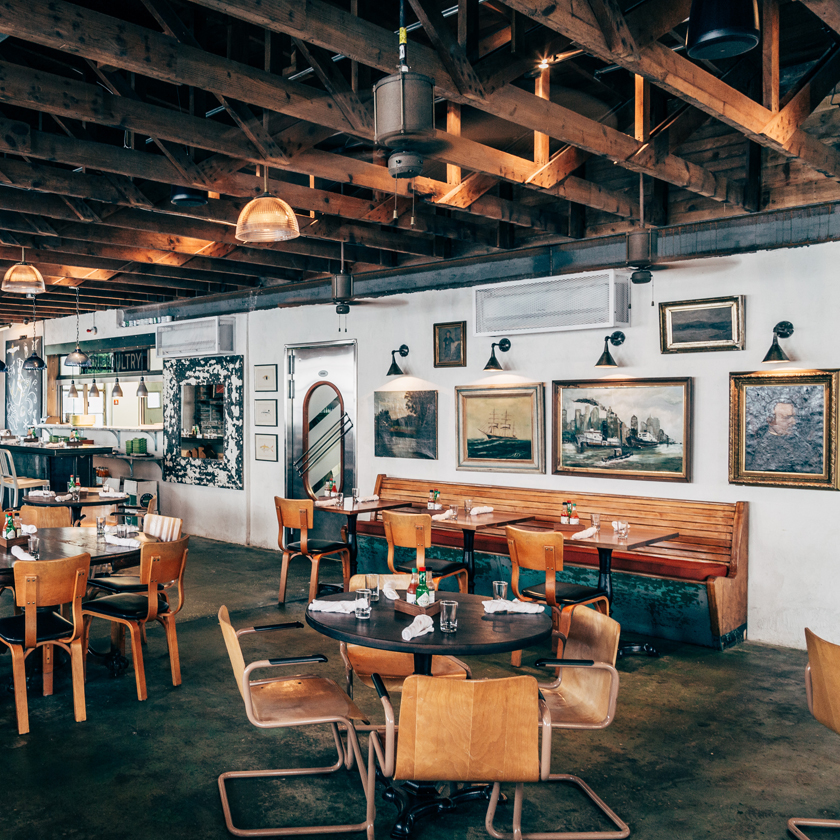 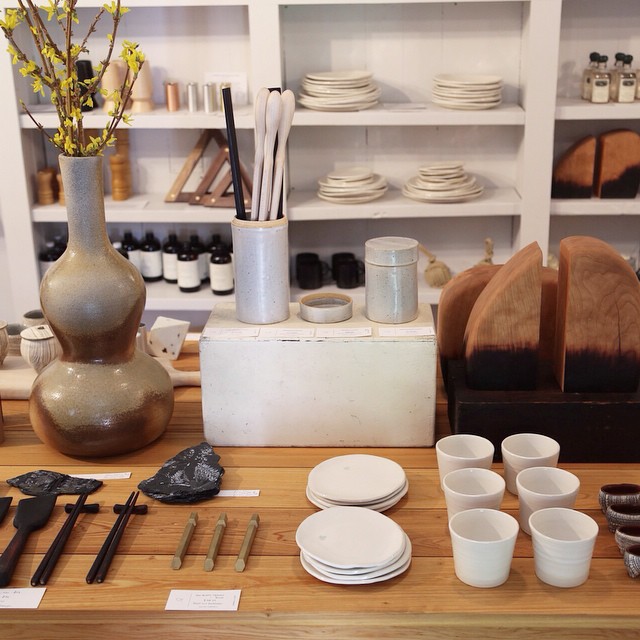